Soldier Field sits on a 99-acre campus surrounded by memorials and statues of significance. The exterior parkland is open to the public and is free to access. These notable memorials and sculptures include: 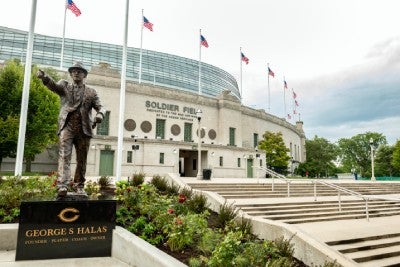 The statues greet fans heading into the south entrance of the stadium. They were unveiled to be ready by the start of the 100th NFL season in 2019. The statue of Halas was made to mimic him calling plays from the sideline, and includes his signature fedora, suit and tie look. Halas was inducted into the Hall of Fame in the inaugural 1963 class after leading the Bears for 40 years. 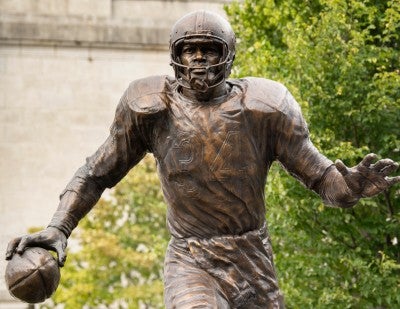 Payton's statue shows him in a running back stance, complete with his uniform and a football in his hand. His nickname "Sweetness" is below his name on the statue. Payton was with the Bears from 1975 to 1989 and held many NFL records when he retired in 1987. He entered the Hall of Fame and had his jersey number retired by the Bears in 1993. 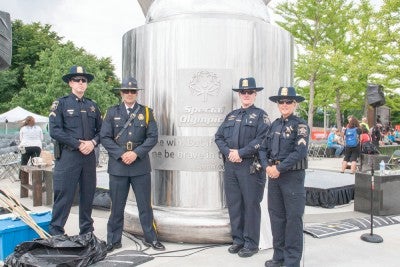 In 2018, the Flame of Hope was memorialized by the Chicago Park District which erected the 30 foot steel sculpture, entitled the "Eternal Flame of Hope" in honor of the Special Olympics 50th Anniversary. The sculpture by Richard Hunt stands in a plaza next to Soldier Field, where the first games were held 50 years earlier in 1968.

The "Eternal Flame of Hope" symbolizes the Special Olympics' theme of inclusion, unity, and hope. The sculpture weighs about 7,000 pounds and has a continuous flame that can grow to 15 feet.

The Chicago Police Memorial Foundation commissioned the $3.5 million Gold Star Families Memorial and Park, a five-acre area of Burnham Park east of Soldier Field. Dedicated in 2006, the memorial pays tribute to all of the police officers who have died or been injured in the line and performance of duty since the formation of the Chicago Police Department in the 1830s.

At the north and south entrances, two towering pylons represent a set of open doors and serve as the gateway into the memorial. These stainless steel pylons have a geometric motif referencing the iconic checkerboard pattern used on the hat band of a Chicago police officer’s uniform. This motif is repeated in other elements of the memorial.

Beyond the north entrance to the memorial, there are four “virtue and value spaces,” denoting the characteristics of courage, honor, service and commitment to family. To the south, a large lawn area has a water wall with Burnham Harbor as its backdrop. This central gathering place is the location of the Chicago Police Department’s yearly candlelight vigil.

The adjacent area, known as the “sacrifice space,” is the spiritual heart of the memorial. It is enclosed by a circular concrete wall that has a band of black granite inscribed with the names of more than 450 officers who died in service to the city. During the design process, members of the Chicago Police Memorial Foundation stressed the importance of conveying a sense of life in this area rather than just focusing on grieving and death. Therefore, this area evokes a sense of calm and protection. Adjacent to the “sacrifice space” is the “living sacrifice space,” an area which honors officers who have suffered grievous injuries in their service to the city.

In 2010, the Chicago Police Memorial Foundation commissioned a bronze sculpture for the “living sacrifice space.” Created by Julie Rotblatt-Amrany (b. 1958) and Omri Amrany (b. 1954), the highly realistic sculptural grouping depicts a police officer in a wheelchair with his hat on his lap, surrounded by his family and another officer. The sculpture’s base sits on pavement that is embellished with a symbolic blue star, and there are several other blue stars on the adjacent concrete wall.

Tribute to Freedom and Water Wall

Artists Anna Koh Varilla and Jeffrey Hanson Varilla created this monumental bronze bas-relief depicting men and women of the Armed Services and their families relaxing along Chicago’s lakefront with the skyline in the background. The figures represent Chicago’s broad ethnic and racial diversity as well as a range of historical periods. The fifteen-feet-tall sculpture is located at the north entrance to Soldier Field. Mayor Richard M. Daley dedicated Tribute to Freedom on Veterans Day in November of 2003.

The monument’s east side features a famous quotation by John F. Kennedy, which reads: “Let every nation know, whether it wishes us well or ill, that we shall pay any price, bear any burden, meet any hardship, support any friend, oppose any foe to assure the success and survival of liberty.” The Varillas also sculpted bronze medallions to symbolize each of the branches of the Armed Services. These are mounted on the adjacent granite water wall at Soldier Field. A married couple, the artists have been working together since 1986 on sculpture, paintings, and drawings. They formed the Koh-Varilla Guild which specializes in classic realism, inspired by centuries of this genre in Western art.

Today, the Balbo Monument is the most ancient outdoor artifact in Chicago. Its shaft, composed of compressed stone known as breccia, came from a Roman structure located on the shores of Ostia, Italy from the time of Julius Caesar. A gift of Benito Mussolini, the monument was dedicated on Italian Day in 1934 at Chicago’s second World’s Fair, known as A Century of Progress. Mussolini gave this column to the city to commemorate the flight of the Italian amphibious airplanes which had landed in Chicago in 1933 during the first year of the fair. This transatlantic flight—the first of its kind by the Italian air force—was so technically challenging that the seaplane crew trained together for over a year before the voyage. The Corinthian column was carefully dismantled, loaded in the 24 hydroplanes planes, transported, and reinstalled near the Italian Pavilion—a building shaped in the form of an airplane to commemorate the feat of General Balbo and his squadron.

The Italian Pavilion was only temporary; however, the monument has always remained in the same location near the harbor in Burnham Park. Today, some consider the monument controversial because of its ties to fascists Benito Mussolini and Italo Balbo. During the 1920s, Balbo attacked socialists and communists, becoming marshal of Italy’s air force under Mussolini. Despite these associations, many older Chicagoans have fond memories of witnessing the impressive arrival of the Italian airplanes more than seventy-five years ago.